What You May Be Missing at Night

Oh no! Red and blue flashing lights in the rear-view mirror. What could you have possibly done wrong? You just hopped in the car for a quick trip to the store. You’re driving the speed limit, not blasting your music, using your blinkers. Did you remember to fasten your seat belt? No.

Between May 24 and June 6, officers statewide are stepping up their efforts to ticket anyone not wearing a seat belt, especially at night.

Terry Pence, TxDOT Behavioral Traffic Safety Section Director, warns motorists, “In 2020 more than 2,733 people who failed to wear their seat belts were killed or seriously injured. Simply remembering to put on your seat belt increases your chances of surviving a crash by 45%. In pickup trucks, that number jumps to 60%, as those vehicles are twice as likely as cars to roll over in a crash.”

You might think that under the cover of darkness, police officers don’t notice unbuckled drivers and passengers. But they do. If you’re pulled over, that means you’ll face fines and court costs up to $200. Instead of putting yourself and others in danger, remember: buckle up day and night, every rider, every ride.

No One is Above the Law

The Click It or Ticket enforcement mobilization is taking place all over Texas May 24-June 6, 2021. Law enforcement statewide will be stepping up their efforts to ticket motorists who are not wearing a seat belt. Whether in a big pickup truck or a tiny sedan, no one is above the law.

Your seat belt is the single most effective safety device in your vehicle. If you’re traveling at 50 mph and stop suddenly, your unbuckled body will keep moving at 50 mph. Your seat belt is designed to keep you from being thrown into the dashboard or windshield—or even onto the road.

Airbags can be big lifesavers. But without seat belts, they can be ineffective and even dangerous. In a crash, seat belts ensure you’re not thrown into a fast-opening airbag—a force that could injure or kill you. You may think your airbag is going to protect you, but it’s designed to work with seat belts, not to replace them.

Driver or passenger, front seat or back, state law requires everyone in the vehicle to be buckled up. Not buckling up could cost you up to $200 in court costs and fines. Or even worse, it could cost you your life. 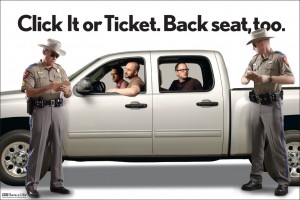 Introducing: Bernard in the Backseat PUEBLO, Colorado — Over the next few weeks throughout Texas a familiar face will tout the safety benefits of wearing a seat belt and encourage viewers to buckle up. Shorty Gorham, a member of the Professional Bull Riders Dickies DuraBullfighters, is being featured in a Texas Department of Transportation (TxDOT) “Click It or Ticket” PSA, which will air from May 23 – June 5 on network affiliates across the state.

“Now I can help keep cowboys from getting hurt or killed both in and out of the arena,” says Gorham in the PSA.

The “Click It or Ticket” spot is part of a partnership between the country’s premiere bull riding organization, the Professional Bull Riders (PBR), and TxDOT. The partnership includes use of PBR footage and photos in PSA campaigns statewide through 2016 plus TxDOT brand exposure at PBR Touring Pro Division events in Texas from May to August.

Texas state law now requires drivers and all passengers in a vehicle to be secured by a seat belt, including adult passengers in the back seat. Anyone unbuckled can be issued a ticket. For more information, visit https:/texasclickitorticket.com.

Buckling Up for Two

Whether you are in the front seat or back, wearing your seat belt is the single most effective action you can take to protect yourself and your unborn child in the event of a crash. Being buckled up helps keep you safe inside your vehicle during a crash. If you ride without a seat belt, you could be thrown out of your car or collide with other passengers.